Skip to content
Notice: This course is not included in annual subscriptions. 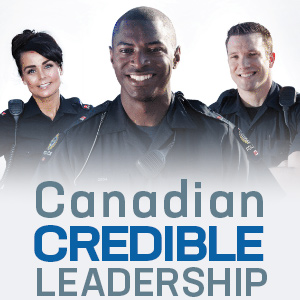 Canadian Credible Leadership (CCL) is the only fully online (self-directed), evidence-based, and field-tested Canadian police and public safety leadership program. CCL is applicable to officers at any stage in their career (from hire to retire) recognizing that every officer is a leader in the communities they serve and in their policing agencies.

The vision is to equip all police leaders, future and current, with the knowledge and skills required to enhance operational efficiency and health, sustain public trust, reduce liabilities and attract and retain the best talent.

The program (comprised of four online Series with final assessment, an e-textbook, over 300 videos, modeling scenarios, practice activities, and resources) focuses on building the leadership skills and competencies which lead to:

You will learn to model, coach, inspire, challenge, enable, and encourage.

Each series is equipped with bookmarking capabilities to save your learning progress as you work through the program. Upon completion of the online program, you will receive a CPKN Canadian Credible Leadership Certificate of completion.

Upon completion of the program, you will have an understanding of your own abilities to demonstrate behaviours, skills, and competencies developed in the following four series:

Content for the series is based on the Credible Leadership Development Program created by Dr. Terry Anderson, Chief Leadership Officer at the International Academy of Public Safety (IAPS) and co-author of the book, "Every Officer is a Leader" (e-textbook available for download, as part of the program). In 2014, the RCMP Pacific Region Training Centre, along with other British Columbia government and municipal police agencies collaborated to pilot and then customize the content to include Canadian scenarios, examples, policies, and terminology. Los Angeles Police Department and Dr. Mitch Javidi, President of the International Academy of Public Safety, are credited for helping Dr. Anderson to shoot the skills modelling videos in 2013 (except the ones shot in Canada) that make this the only online, video-based, international leadership development program for justice and public safety personnel.