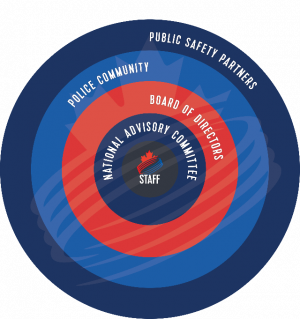 CPKN acknowledged it’s 15 year anniversary at Stanhope 2019 with Sandy Sweet presenting a brief history of CPKN’s origins and the big network of organizations and individuals who have been a part of its growth and development.

In 2001, a report called Strategic Human Resources Analysis of Public Policing in Canada was released. The report recommended the development of standards for all jobs in policing (competencies), national collaboration in delivery of common training, and the development of internet-based learning resources for police across Canada. Two things were happening in tandem at this time: John Arnold had an organization called PoliceLearn.com (PLC) with a network or organizations collaborating to develop online training, and Holland College had received federal funding to develop the Justice Knowledge Network to develop and deliver eLearning to Canadian Police.

The Justice Knowledge Network and PoliceLearn.com joined forces and from this collaboration, in 2004 CPKN was born with the first President named to CPKN being John Arnold. CPKN launched with an LMS, four courses, and a fax machine. With all these tools in place, and expectations of success, Sandy Sweet and John Arnold went on tour with 32 scheduled stops to deliver the message about “Cops, Teaching Cops, Cop Stuff”… online. With community support, funding, and the skills needed to succeed, what could go wrong? 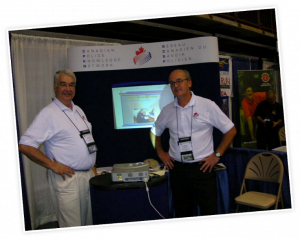 Sandy and John soon learned that there were barriers to adopting this new way of learning. Culturally, organizations needed a plan to integrate eLearning within their existing models and faced a distrust of eLearning and its effectiveness. There were technology discrepancies, services needed to have the appropriate security measures in place but also allow access to appropriate technology to complete eLearning. Financially, it was a barrier as there were up-front costs associated with accessing and developing online learning programs. The team had to refocus and find innovators and early adopters, get their buy-in and hope that the rest would follow.

To get to these early adopters, it was agreed a conference to focus on the benefits of training and technology enhanced learning was the best way forward. And so, in 2007, the first Stanhope Conference was held. With a captive audience, and two full days of discussion, CPKN emerged with lessons learned and path forward. So, what did we learn?

Without this first Stanhope Conference, CPKN might not exist today! The organizations and individuals who participated in this first Stanhope, along with members of PLC were the early foundations of the Network. As you can see in the graph below, after 2007, sales and registered users really started to grow.

Also, in 2007, the HayGroup published a report on behalf of the Police Sector Council called A National Diagnostic on Human Resources in Policing. The recommendations from this report further promoted the foundations on which CPKN operates technology, standards, and collaboration. The report found:

In 2012, a Competency-Based Management Framework (CBMF) was published by the Police Sector Council, and today, CPKN owns the intellectual property and online space for the CBMF with projects and plans underway to update the CBMF.

Around this same time, CPKN, along with many other public safety organizations and community partners, presented to a Standing Committee on Public Safety and National Security. Results of these discussions were published in a report The Economics of Policing released in 2014. Of the 13 recommendations in the report, only one dealt with training: “that Canada build on its excellent reputation for highly trained police forces through the further integration of e-learning as a cost effective way of executing some of the in-class training required”. From this, CPKN’s ideal future took shape. It included:

Working towards these goals, what do we know today? Last year police expenditures were $15B, and roughly 6-10% of this budget is spent on training, though there is no clear measure of spending on training. There are very few national standards around policing and training. Provincial police acts outline training requirements, but training is very different from jurisdiction to jurisdiction. Police academies are also very different in each province. Civilian members are often overlooked in discussions. Many organizations and individuals are interested in building toward consistency and a reduction in duplication though this is difficult as there is no clearly defined leader or secretariat for these discussions.

The organizations, government departments, and public safety groups who are involved in these discussions are many and include the following non-exhaustive list:

This past year, CPKN has undertaken projects that reflect Collaboration, Technology and Standards. Some of the work has included: collaborative course builds with representation from various police services and investment from CPKN, serving on national committees with CAPE and CACP among others, received federal funding to deliver relevant projects for the community, and provided information and resources to other organizations.

In addressing the need for national standards, work is underway to modernize and update senior leadership competencies within the Competency Based Management Framework, and we are working internally on a catalogue review to update content and format in the CPKN catalogue.

Technology continues to grow and change. CPKN has been working to upgrade Ilias, the LMS, and continue to improve its UI/UX. We are hosting additional webinars, and work is currently underway to develop accessible and engaging communities of practice.

The new year brings opportunities to continue to grow the network and explore changing technologies!