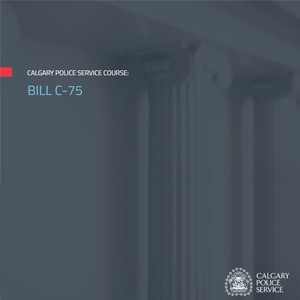 Bill C-75 received royal assent on June 21st, 2019, with the different amendments in force on the 30th, 90th, and 180th day following. This e-learning deals with the last amendments to come into force at 180 days being December 18th, 2019. In an effort to assist the service with proper implementation of this legislation, this e-learning will explain and articulate the amendments to the Criminal Code taking place on that date that directly impact police including changes to basic terminology, definitions, processes, documents, and forms. There are many additional amendments in Bill C-75 that do not particularly affect police operations and will not be discussed. The Calgary Police Service recognizes internal resources and external partners, developing course content through consultation with the Calgary Indigenous Advisory Board, SORCe, Diversity Resources Team, Arrest Processing Section, and Youth at Risk Development.