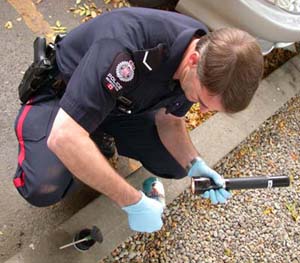 The use of forensic DNA evidence has a profound impact on criminal investigations. The ability to differentiate between individuals on the basis of their “DNA profile” has resulted in more reliable identification of criminals, the establishment of innocence for wrongfully convicted persons, and the capacity to link crimes not previously believed to be associated. As with any form of evidence, police officers, conservation officers, and other law enforcement personnel must collect, handle, and store DNA evidence according to accepted methods to ensure its validity at trial.

Forensic DNA Evidence provides officers involved in the investigation of criminal offences, including serious violent crimes, sexual crimes, and other major crimes in which forensic DNA evidence may be utilized, with a comprehensive understanding of the DNA warrant provisions of the Criminal Code, case law, and evidence collection issues.

This introductory level course is designed for police or law enforcement officers who may be involved in investigations in which DNA may be used as evidence. It is an effective training resource for new personnel, but also serves as a useful reference or refresher for more experienced officers.